How to catch water leakage before it catches you 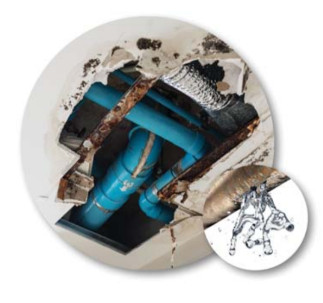 Few of us think about the impact of water damage to our properties until it’s too late and the damage is done. According to a report from ConsumerView, titled ‘Quantitative Assessment in Europe’, 50% of households in Europe have experienced water damage. Similarly, the Insurance Industry Research organisation estimates that 14,000 people in the US experience a water damage emergency at home or work every day and the annual cost to insurance companies is approximately US$2.5 billion. When it comes to water damage, there is no doubt that the cost to owners and insurers can be crippling for citizens throughout the world.

Doing nothing and assuming that it can’t happen to you is the worst course of action. Fortunately, proactive, preventive measures that utilise leading IoT technologies are now available and more and more households and businesses are adopting them to set up warning systems to prevent impending disasters.

Based in Sweden, IoT solution provider, iioote, which is a LoRa Alliance member, has developed a preventative solution that uses Semtech’s LoRa devices and wireless radio frequency technology. Semtech’s solution is composed of a widely adopted long-range, low-power solution for IoT that gives telecoms companies, IoT application makers and systems integrators the feature set necessary to deploy low-cost, interoperable IoT networks, gateways, sensors, module products and IoT services worldwide. IoT networks based on the LoRaWAN specification have been deployed in 100 countries and Semtech is a founding member of the LoRa Alliance, an open, non-profit organisation dedicated to promoting the interoperability and standardisation of low-power wide area network (LPWAN) technologies to drive implementation of the Internet of Things.

iioote’s newest preventative solution, SenseIoT, utilises LoRaWAN-enabled temperature and humidity sensors, LoRaWAN gateways and the SenseIoT sensor-to-platform system, which detects and addresses water leaks in private buildings before damage can occur. Sensors are installed in risk areas in the vicinity of water and sewage pipes, such as in kitchens, bathrooms and basements. A LoRaWAN network connects sensors to the backend where data is analysed, visualised and acted upon.

iioote’s LoRaWAN gateway of choice is MultiTech Systems’ MultiConnect Conduit an awardwinning, programmable gateway for the Internet of Things. The Conduit is a configurable, manageable and scalable LoRa gateway for industrial IoT applications.

iioote’s SenseIoT is a system that monitors moisture and mould in properties with wireless sensors using the LoRaWAN standard. The solution has been tested by the Research Institute of Sweden (RISE) in a four-month test of a warning system for moisture and water damage. The conclusion of the measurements found that, when appropriate and correctly placed sensors are used, a water leak can be detected at an early stage thereby avoiding consequential damages. Minimisation of the expansion of a water leak can also be enabled.

How iioote works
Humidity and temperature sensors are installed in places where there is a high risk of water leakage, for example in bathrooms, kitchens, attics and building basements. The sensors report their measured values on a regular basis and in the case of excessive values, based on monitoring values set in the device, will send immediate alerts. By monitoring the trends of humidity and receiving leakage alerts property owners and landlords can avoid serious damage or respond ultra-quickly in case of an incident. In this way, expensive moisture and mould damage can be avoided or minimised.

The sensors are wireless and battery powered with a lifespan of up to ten years depending on configuration. Moreover, installation is straightforward and does not require a plumbing technician or electrician.

The sensors are connected to a public LoRaWAN radio network built for IoT, or can use a residential or private LoRaWAN network. The humidity and temperature information are transmitted wirelessly to the cloud-based SenseIoT monitoring and alarm solution in which thresholds can also be set to match the local monitoring conditions, as we can expect bathrooms to be more humid than an attic or basement.

The sensors’ data values and trends are made available in easy to understand reports and alarms or notifications can be configured for different threshold values. The system is easily accessible via web readers and mobile devices. Depending on where one sits in the value chain, the return on investment (ROI) for a full solution is measured in months rather than years due to the cost effective LoRaWAN sensors, gateways and software solutions. For insurance companies the number of claims would come down substantially and in case of an emergency leak the damages will be much lower given the immediate response. For building owners and landlords, the trend analysis will make sure buildings remain in good shape and do not need major repairs after many years of exposure to out of band humidity and fast responses to leakages will limit the resulting damages and create better customer satisfaction. Humidity is often also related to health risks and loss of irreplaceable materials which is not reflected in amounts.

SenseIoT in action
Recently the SenseIoT solution was installed in the renovation project of a 1938 tenant-owned apartment building situated in the suburb of Kålltorp in Gothenburg, Sweden. The project included updating of all drainage pipes and the electrical system as well as building refurbishment. A water leak in such a house, which in some cases could take three to five years to detect, would be extremely expensive and would make it very difficult to dry and rebuild. With this in mind, the installation of the new SenseIoT system was a very good solution for detection of water leaks and prevention of prolonged damages. In the bathroom, the sensors were placed in the wall near the bathtub tap and in the floor construction near the floor drain. There is also a reference sensor placed in the same floor construction section where the floor drain was placed eight feet away. The reference sensor is used to monitor the development of humidity spread in the construction during leakage. In the kitchen, the sensor was placed in the space under the sink cupboard and floor. The sensor is used for detection of both dishwasher leaks as well as leakages from the sink for pressurised and passive water intrusion.

“The SenseIoT solution gives us security against unpredictable costs for the estate when it comes to water leaks and it is also a quality label for each tenant-owned apartment. We get constant information about humidity, temperature levels and more, enabling us to know the status in the building at all times. As an extra bonus, we will receive a discount on the insurance,” says Henrik Berntsson, the chairman of the board of the tenant association within the building.

Discounts from insurance providers are significant, as the solution provides a metric to ensure the cause of damage is accurately determined. “The saving can be huge and should be de-facto for all real estate owners, insurance companies and others,” adds Berntsson. The charge for a system varies with volume. The average size of a building is 20 apartments for tenant-owned apartments in Sweden. Such a system would cost around a US$1,500 one-time fee and around US$1,000 yearly for the SenseIoT subscription. An option is offered for monitoring of data and site visits when a leakage is assumed.