Internet of sharks: Virtual Reality gets up close and personal with Hammerheads and Tigers 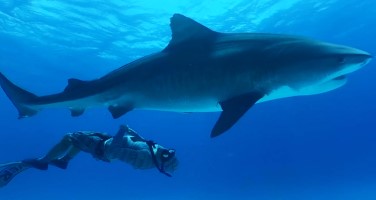 Fearsome, lethal, killers … the reputation of the tiger shark has long haunted our culture, leading to these creatures being miscast as villains of the seas. Now a new VR experience, Shark Dive by Immotion, sheds a revealing light on the personality and habits of these animals, allowing people to get closer to them than ever before, and to understand their strategic place as an apex predator in a fragile ecosystem.

Filming in the Bahamas at Tiger Beach, the migratory home of the sharks, the project team was led by Matthew Smukall, CEO of the Bimini Shark Lab and the Save our Seas Foundation, and captured intimate footage of tigers and great hammerheads.

Far from being the beast of these seas, the first instincts of the tiger sharks aren’t to kill but to clean the waters of smaller fish or dead and dying prey. This serves a vital role in maintaining the balance of the ecosystem, without which smaller fish may overpopulate with dire effects across the marine food chain, while the removal of sick fish prevents the spread of diseases amongst species.

Of course, understanding the power of these sharks and their attuned hunting skills is also part of treating them with the respect they deserve. Because of their voracious appetite, tiger sharks can be curious and aggressive towards humans in the water and as night falls the attention of the sharks turn to hunting, and while their focus was on removal of smaller prey, it did lead to some close encounters with the film crew. It was also observed that a signal of imminent aggression was the fluttering of the shark’s eyelids.

As part of the project, the team were, for the first time, successfully able to tag a tiger and great hammerhead with a small virtual reality camera, giving breath-taking footage, revealing what it feels like to move like a shark. For the great hammerhead, this meant seeing the world in 360 degrees. The footage clearly shows how the hammerhead needs to move its head in constant motion to eliminate the central blind spot.

Building on Immotion’s VR aquatic expertise, and the recent release of Swimming with Humpbacks, the experience is the latest installment within its Blue Ocean Aquarium series. It combines both motion and amazing imagery, allowing people to transport themselves to the seas of Tiger Beach and ‘virtually’ swim with some of the most amazing creatures in the oceans.

Rod Findley, group commercial director, Immotion Group says: “The experience makes full use of the visual, sound and motion capabilities of our VR Cinematic motion pods to deliver something ground-breaking and memorable, that will enhance the conservation efforts to protect these creatures. Using VR technology to study the movement and behaviour of these sharks can play a crucial part in educating people to gain a better understanding of the species, and the vital role they play in preserving the marine ecosystem.”

Immotion presents its experiences in VR on a proprietary motion platform where seat motion is synced with the VR film to give a 100% immersive experience. Shark Dive is part of the Blue Ocean series to aquaria, zoos and science centres around the world.

This experience provides a rare glimpse and insight into the world of the tiger shark, who commonly reach lengths of 3.3-4.3 m, weighing between 385-635 kg. The largest adults can attain a length of over 7.4 m and weigh over 900 kg. Due to demand for its fins and over-fishing, the tiger shark is listed as “Near Threatened” on the IUCN Red List of Threatened Species.

Great hammerheads, due to low birth rates, sensitive bodies and the shark fin trade, are vulnerable to human impact, and the International Union for Conservation of Nature (IUCN) classified the great hammerhead shark as endangered in 2007.