Deep Tech in 2020: How different will be the paradigm 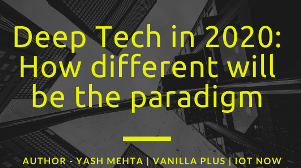 Pushing multi-device control to our palms is what the Internet of Things (IoT) promised but has never been restricted to. Ever since we have praised it to the skies, the technology’s propelling reach to our lifestyles has been a fascinating endeavour, says Yash Mehta, an IoT and Big Data Science specialist.

Not only has it made things simpler but it also stepped up to resolve real-world issues. So, next time if you stumble upon a farmer who operates the sprinkler in his field through a smartphone, thank IoT. And thank every other technology such as Blockchain that is blazing the trail with workable solutions to combat the most distressing world problems. By the time you read this, the number of connected devices will have inched further from 26.6 billion.

More than 26 billion active devices! That’s huge, and no less than a world in itself. Imagine the volume of data being produced and streamed and the powerful insights they could be providing. Blockchain, on the other hand, has been put to test the maximum number of times. Hundreds of case studies have been endorsing for a better world with decentralisation; accounting for fastened and accurate validation.

Until 2019, each of these technologies had been worked upon in isolation, with a few bright sparks here and there discussing the scope of going hybrid. However, 2020 will be different.

IoT will continue to impact more areas such as manufacturing, transportation, healthcare, and consumer goods. While until 2019, fetching the data was the key, the newer decade will see better handshaking with predictive analytics to understand consumer trends and preferences.

Take automotive for example, wherein vehicles in compliance with the CASE (Connected, Autonomous, Safe, and Electric) norms are being manufactured to produce real-time, workable data about driving patterns. So, the next time you exceed speed limits, your insurer will be gathering the evidence so that fair and accurate claims can be processed. And at the manufacturing stage, the factories will be empowered to analyse real-time equipment health, contain downtimes and maximise throughput rates.

Meanwhile, Blockchain, which has struggled its way amidst speculations of jeopardise, is finally ready to prove its worth. As a peer-to-peer network, Blockchain cryptographically seals the records of transactions and eliminates the need for an external intermediary to build trust. Therefore, it fastens the processes that render real-time insights in lessened costs. Amongst the first adapters, financial technology (fintech) has a stronghold over 60% market of share.

Oracle in its recent whitepaper quotes a finding from Gartner that Blockchain could generate US$176 billion (€158.68 billion) of revenue by 2025.

So, a professional networking platform like LinkedIn, if it goes decentralised will disable making modifications to the past work experience history. This will empower the recruiters to surpass manual efforts to validate the information provided.

Whereas fintech has the backing of world banks accounting for 60% of the market share. From decentralising accounting and auditing to accurately checking the credit score before lending loans, Blockchain use cases in these areas will propel to broader implementation in 2020.

Disrupting existing business models, the following five organisations are ahead of the curve.

Seebo, using IoT modelling and simulation, automates the production line assessment in real-time so that non-performing units can be identified. Scrutinising production issues by combating waste and loss of yield.

Seebo CEO, Lior Akavia says, “While many companies look to leverage AI, we pioneered process-based AI, specifically for process manufacturing. The true revolution lies in having contextual insights to process inefficiencies, in order to better understand their root causes, and predict their occurrence to prevent them from happening.”

Given the shortage of talent within the IoT community, Hurify, a project negotiation platform built on Blockchain, enables recruiters to connect with available resources and close associations faster than conventional mediums. Since smart contracting improvises the on-boarding process, resources are left assured with timely pay-outs and other commitments as per the unalterable digital contract.

Mouli Srini, Hurify & Mobodexter CEO asserts, “Blockchain is poised to evolve further in 2020 across four dimensions. 1) Platform Robustness 2) Improved Interoperability 3) Scalable Infrastructure and 4) Enhanced Security. Platform robustness would include switchable consensus mechanism based on the use case and strategies to prevent data loss and corruption in blockchain.

Improved Interoperability would include integration with existing enterprise systems like ERP and other existing off-chain systems like Identity management using Oracles.

Products close to expiry on the shelf are the greatest bone of content in the retail industry and RapidPricer has a solution to this. Using a network of devices such as CCTV cameras and the analytics dashboards, RapidPricer senses the quality of the product and those deteriorating are quickly notified to the analytics system.

Kiran Gange, CEO of RapidPricer wants to “assure that the price of every product is right for every customer every single time and unlike traditional practices, we automate pricing and promotions in real-time. If 10% increased ROI in 10 minutes of learning is ground-breaking, RapidPricer is for you.”

BlockCerts Blockchain is transforming businesses by creating secured trust, truth and transparency through its patented KYC authentication, a smart contract streaming solution and a suite of integrated SaaS solutions and its ‘next generation’ distributed ledger technology.

Pushing for open source app developments, Greg Kular, global business director at Blockcerts believes, “the key problems that Blockchain will solve for businesses are where there is a lack of trust, transparency and truth amongst stakeholders in the entire business model.

This really applies to all verticals at some level of pain, The companies that have high transactions and a susceptible to fraud will be able to compress the costs associated with this.”

Most IoT developments were being done by the product brands themselves until; Breadware emerged as a full-scale services provider for IoT development & deployment. From ideation to actualisation, Breadware covers the entire spectrum of phases to build a product. And has expanded the brand’s reach shortly.

Daniel Price, CEO at Breadware says, “As staunch believers of the transformation that connected devices could bring, we want businesses no matter what the capital, to benefit from the revolution called IoT. So, if you have an idea entailing IoT, let us extend our engineering expertise it deserves.”

Since security is the greatest concern in IoT while and the greatest reason to use Blockchain, the convergence of the two technologies is nothing less than a revolution. The network of devices (IoT) is all connected to centralised cloud storage that makes them more vulnerable to theft.

Blockchain, being a distributed network of millions of devices could provide a great backing to the IoT. There’s an enormous opportunity out there and enterprises must align their investments and preferences to reap at the earliest.

The author of this blog is Yash Mehta an IoT and Big Data Science specialist.